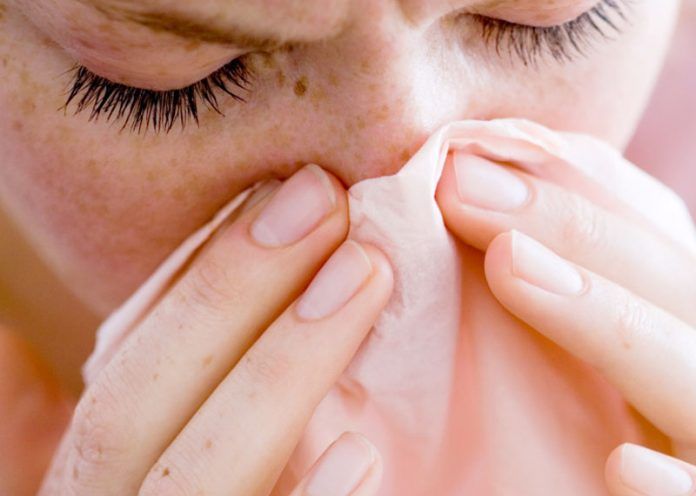 Only someone suffering from sinusitis would know the pain and discomfort that comes with the infection. It is as we have discussed before, an infection of the cavities around your nose, which result in them getting inflamed and swollen.

Reading ahead you shall get to know about five of the most common symptoms of sinusitis, which a patient regularly undergoes.

The commonest, an often the most unpleasant, of all symptom of sinusitis is the pain, that comes along with it.

The sinuses are several in number and situated both above and below the level of our eyes, as well as behind the nose. Any, or all of these could hurt, in an irreparable manner, with the coming of an infection.

If you thought that the pain from a sinus infection was as bad, as bad could get, then just hold on till the nasal discharges start.

On blowing the nose, a greenish yellow phlegm may appear, often mixed with blood, as the infected sinuses drain their fluids into the nasal passages.

Even while you are dealing with the incessant nasal discharges, the inflamed sinuses may cause hindrance to your natural breathing process.

The sinuses get swelled up due to the infection, which in turn block the nasal passages, thus causing breathing problems. The nasal congestion, may also lead to a diminished sense of smell and taste.

The headaches caused by sinusitis, are often at their menacing worst, early in the morning as the fluids collect in the cavities throughout the night. A change in temperatures could only worsen the situation.

The annoying nasal discharges could leave your throat with a raw and sore sensation.

Although the initial symptoms may seem mild, within quick time, the situation may get worse with the development of severe cough.

Read on about: Cough Relief

What Happens If You Don’t Brush Your Tongue? 7 Grave Side Effects!

What Happens If You Sleep 6 Hours A Day? Know The...

Somapika D - April 10, 2020
0
How many hours a day of sleep do you think is necessary for good health? The National Foundation of Sleep (R) suggests that sleeping...

10 Body Parts You Are Not Washing Properly On A Daily...