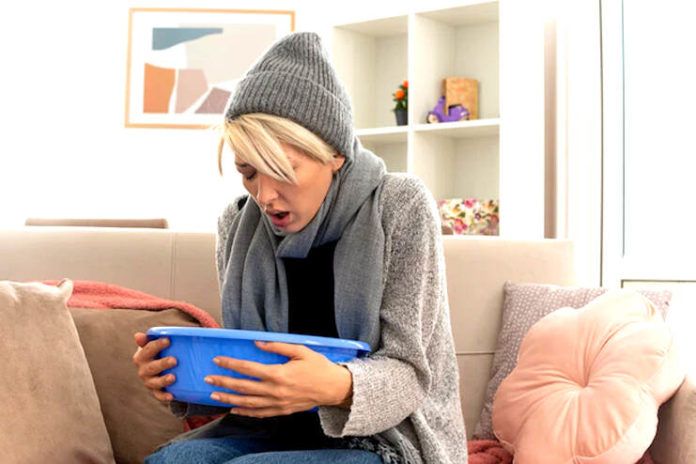 You had a great weekend by having an amazing time partying and drinking. What follows the next day is a nightmare, and you end up feeling hungover. Hungover not only gives you some crazy headache but also makes you queasy and pukey, you end up feeling nauseous, and even cause vomiting.

Vomiting and nausea are the symptoms that are difficult to deal with. The reason behind your hungover and vomiting is, that when you drink alcohol, your body produces more stomach acid and delays your stomach emptying to accommodate the alcoholic substance. The toxins from alcohol react with your body and end up having such side effects.

When this happens you may want something that can give you quick relief and makes you feel less pukey. That is why in this article we have mentioned some of the best remedies that will make you stop throwing up. Keep reading further to find out more!

What Makes you Throw Up After Drinking

By Throwing up, or vomiting our body removes the potentially harmful material in the natural way that a person has ingested and that is how it reacts to alcohol. When your body takes alcohol in, the liver converts it into a chemical called acetaldehyde, which is a toxic substance.

So later on the liver converts the acetaldehyde into acetate, which the body removes it by converting it to water and carbon dioxide. The thing is your liver can only process a limited amount of acetaldehyde at a time. So if the acetaldehyde levels are higher the liver will not be able to cope with it, thus the body gets rid of these excess chemicals by vomiting.

Binge drinking is drinking when a female or male has approximately four or five drinks, respectively, in less span of time. This can be a cause of vomiting after drinking alcohol. Which was reported (R) by according to the National Institute on Alcohol Abuse and Alcoholism (NIAAA)

How Much Alcohol Causes a Hangover?

Having more than one or two drinks per hour can cause issues in your body. Your body needs about an hour to process and metabolize, one drink, let us understand more about this quantity.

What are the Symptoms of Alcohol Hangovers?

Below are some of the common causes of hangovers-

In general, your symptoms depend on certain factors and how severe they are, quantity like how much you drank, and for how long or how quickly. Also, other factors and your health also play a role. Some people who are not used to drinking may get a hangover after even one drink. Other people who drink heavily may not notice these symptoms or face such issues.

Best Way to Stop Throwing Up After Drinking

Certain hangover remedies can be used to treat a hangover. oftentimes these remedies are not based on science, and some can be dangerous. So it is important to follow remedies that can be useful and suitable for your body. Here are some remedies you can follow to improve hangover symptoms which include-

1. Bland foods- Consuming bland foods with complex carbohydrates, such as toast or crackers. This will help you to boost low blood sugar levels and reduce nausea.

2. Hydrate yourself- To reduce dehydration drink water, healthy juices, and other nonalcoholic beverages. Hence to rehydrate drink small sips of clear liquids. Also, you must wait until about 30 minutes after you last vomited. Examples of clear liquid include water, Gatorade, Pedialyte, or Powerade. During this time low sugar ginger ale works like magic as well.

3. Plenty of rest- Getting enough sleep to counteract fatigue. Getting plenty of rest is the key. Although, is no need to try to overdo it on the day of a hangover. Sleeping it off can help you feel better.

4. Do not drink more- You must avoid “hair of the dog” or drinking more to “feel better.” Give your stomach and body a break and don’t drink again the night after a vomiting episode.

5. Medication- You can consume antacids to help settle your stomach. Try aspirin or other nonsteroidal anti-inflammatory drugs (NSAIDs), such as ibuprofen or naproxen, take it with small bites of food, to help with your headache or muscle ache. However, use them on the doctor’s advice since they can upset your digestive system. Do not take acetaminophen, when combined with alcohol it can be toxic to your liver.

6. Being patient- Hangover symptoms usually tend to ease up over eight to 24 hours. Your body has to clear the toxic substances of alcohol, for which you must rehydrate, and heal tissue and that will help you to restore functions and activity to normal.

Is it a good idea to make the person throw up after drinking to ease the hangover?

Many people may think that making a person throw up is a good idea when feeling nauseated, but in reality, you should not make yourself sick without first consulting a medical professional. A person who induces vomiting by forcing their fingers or sticking an object down their throat runs the risk of scratching or puncturing their esophagus. A study has shown that a person who frequently makes themselves throw up may experience symptoms (R) such as ulcers, electrolyte imbalance, throat damage, tooth decay, and also dehydration.

Why Does Drinking Alcohol Myou Throw Up?

There are certain reasons why your body can throw up. The toxins that your body intakes from alcohol can be harmful, so as you vomit, your body protects itself and gets rid of these toxins.

Your body cannot tolerate alcohol. If you don’t overdrink, the liver of your body specially neutralizes acetaldehyde with a substance it makes called glutathione. When your body balances these two compounds, you’re fine. But if when you drink too much. Then, your liver will not be able to produce enough glutathione to keep up with what you’re drinking. After which, your body will realize that it is not possible for the liver to be able to keep up with how much acetaldehyde is present and gets rid of it another way, which is through vomiting.

A person who drinks alcohol daily in higher quantities is at increased risk for a condition called alcohol gastritis. It takes place when chronic alcohol exposure irritates the stomach lining and tends to damage it. A person who has alcohol gastritis can experience frequent stomach-related concerns, such as nausea, ulcers, and acid reflux. Chronic alcohol interferes with the absorption of nutrients and is linked to cancer, pancreatitis, cirrhosis, diabetes, and more.

When Do You Need to See a Doctor

You may throw up after drinking and feeling hungover, but at certain times even after some time, you may continue feeling nauseated. That is when you may need to see a doctor

Reasons when you need to see a doctor:

During this time, when your body is facing a lot of issues and may not be able to cope with them, it is best to seek medical treatment as soon as possible inside of waiting for things to be better.

After drinking these hangover symptoms like vomiting most probably will go away within 24 hours (R). Even if you vomit after drinking, it’s best to let for your stomach to let it all out and do what needs to be done. Once the alcohol toxins are out of your body taking steps to prevent dehydration can help you feel better.

If your vomiting continues or faces some serious issues then seek immediate medical treatment. Hope this post helps you to know about the remedies that can help you to stop throwing up after drinking. Thank you for reading.

15 Home Remedies For Anosmia – Get To Smelling Again!

15 Natural Remedies To Get Rid Of Flatulence For Good

Yoga Mats VS Exercise Mats, And What Is The Difference Between Them

Things to Remember Before You Get Lip Tattoos