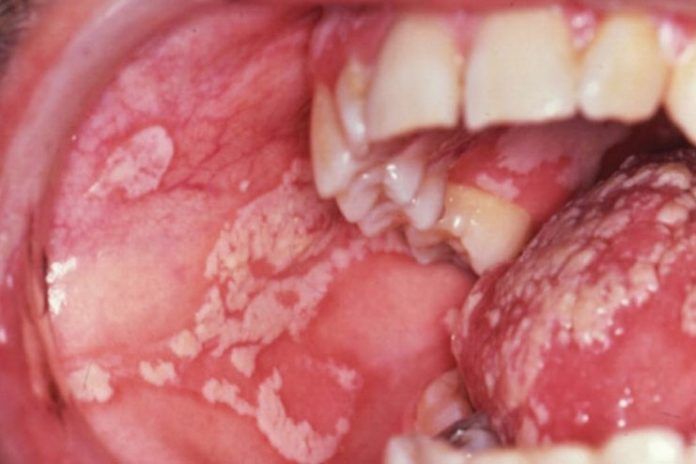 It should be noted that the bacteria of candida albicans always reside on your tongue is very small quantities. However, when this fungus starts to grow uncontrollably, it can cause the problem of oral thrush.

However, you can get rid of this growth as soon as the treatment is received.

It should be noted that oral thrush has been considered as one of the common problems and does not cause any major complications usually. However, you may have a problem due to oral thrush if you are suffering from the immune system.

Oral thrush may also take place due to a weakening of the immune system due to certain medications, which causes the reduction in the number of good microorganisms, which are helpful in preventing infection. Healthy cells can be eliminated due to cancer treatment such as radiation and chemotherapy. This put you at higher risk of various other infection such as oral thrush.

Various diseases, which attacks the immune system such as AIDS, HIV as well as leukemia promotes the risk of oral thrush, Another deadly disease which weakens the immune system and can cause the problem of oral thrush is diabetes. In diabetes, an extra amount of sugar is always present in saliva, which can play a key role in promoting the growth of the Candida albicans.

What are thrush symptoms?

Oral thrush does not cause any symptoms at the initial stage. However, as the infection of fungus starts to grow with time, some symptoms may start to erupt. These symptoms are as follows.

The major symptoms of oral thrush in infants are

Sometimes babies, suffering from the oral thrush can pass the infection to their mothers while breastfeeding. Some of the major symptoms of fungus infection during breastfeeding are,

The patches, which appears due to the oral thrush are of creamy or white in colour which can bleed slightly after wiping off the area. You might also experience swelling as well as redness of the area around your mouth lining. Other lesions may also appear at the same time which is also linked to the problem of oral thrush.

Due to oral candida, along with lesions, you may also face the problem of burning sensation in the affected areas. You may experience intense pain while doing normal activities such as eating or drinking. Other problems such as loss of taste as well as unpleasant taste in the mouth can also occur due to invasions of yeast in the mouth.

Sometimes, white plaques may also take place in the mouth, although it may not be linked with pain and may appear in various other areas such as limbs, nails as well as scalp.

How to Get Rid Of Oral Thrush?

It should be kept in mind that age, as well as overall health, are the 2 main points, on which the treatment of the oral thrush is depended upon. The main aim of the treatment to prevent the spreading as well as the growth of the fungus.

Some of the medical treatments, which can be used to prevent the problem of oral thrush includes,

Some of the points which you should keep in mind while treating the problem of oral thrush can include,

For the breastfeeding mothers, the treatment includes,

How to Prevent Oral Thrush?

Follow the major preventive tips which are listed here to prevent the problem of oral thrush.

14 Things You Should Never Do After Eating – Know The DON’Ts!

Have You Been Drinking Water After Meals? Science Says it Might Not Be a Favourable Option

All You Need to Know About Raisins Benefits

Techniques For A Good Massage At Home – Everyone Must Try!!

Somapika D - February 4, 2020
0
If you are someone who eats meat like their life depends on it, chances are that the high protein intake could end up elevating...