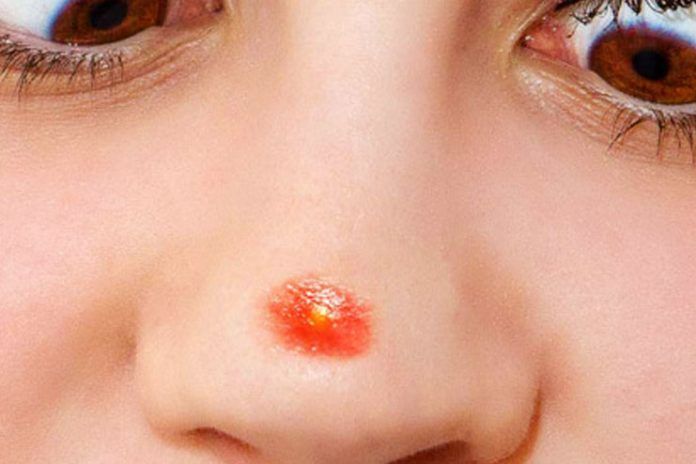 A pimple anywhere in the body makes you uncomfortable. A pimple on the nose is also a common beauty problem and occurs due to malfunction in the sebaceous glands, which helps in protecting the natural protection known as sebum. This sebum may get thicken and starts to clog the pores. If the opening is still present, it causes the formation of black dots. The cyst may appear if the sebum gets trapped in the duct. This inflammation may result in the formation of red large boils which is also known as acne on the nose.

Acne problem is the most common in teenagers as they undergo the changes in hormones during puberty. However, in adults, it may also cause due to the problems in blood circulation, immune system as well as endocrine along with various infectious diseases.

What is the Cause of a Pimple no Nose?

The most common causes of a pimple on the nose are stress, the deficiency of vitamin A and the use of poor quality cosmetics. The appearance of a small nipple on nose tip may not be the point of worry. However, the large pimple may be the sign of scar on your nose which is considered as highly difficult to remove.

It is also said that even a small pimple on the nose can be a sign of the problems of the liver as well as muscle. There are different types of a pimple on nose and the causes changes accordingly.

This will appear on the wings of your nose and according to the experts, it may cause due to the acute condition of herpes.

This acne is considered painful and may also form bumps on your nose which is also a result of an inflamed cyst.

These pimples appear on the nose due to the dense knots. It is said that the easiest way to reduce a pimple on the nose is through the process known as electrocoagulation.

These pimples occur due to the effect of Demodex mite on your skin. This may cause due to the gastrointestinal disorders. Due to the pink pimples, your skin gets thicker and covered with the tubercles.

The staphylococcal infection of a red pimple is known as purulent acne. This is again highly painful and may cause various problems. It is recommended to take medical help immediately if you notice the first sign of it.

How to Get Rid of a Pimple on the Nose Fast? 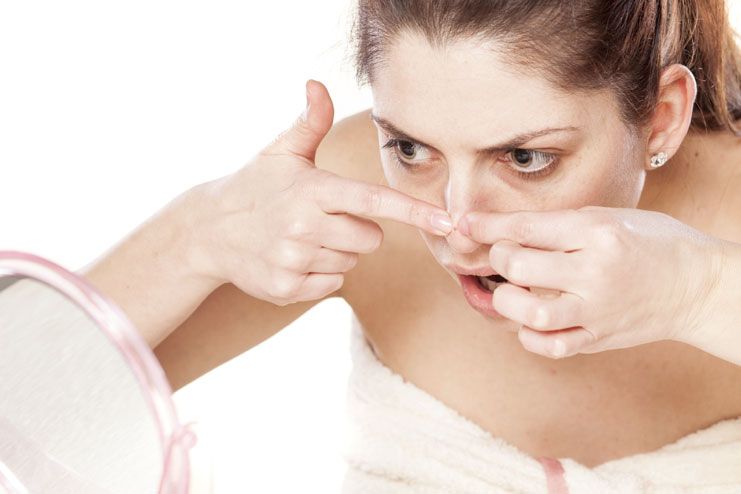 The common remedy is highly useful in reducing the inflammation as well as swelling of the pimples. Ice is also helpful in improving the blood circulation of the skin which helps in removing the pimple on the nose.

Although there are no significant proofs on this, steam can be useful in removing the pimple on the skin. Steam helps in opening of your skin pores, which is helpful in eliminating all the impurities as well as dirt from the skin. This results into the breathing of the skin.

You can also use lemon, which is a citrus fruit to eliminate all the pimples on your skin. Lemon is filled with vitamin C, which is helpful in drying the pimple faster.

Apple cider vinegar is one of the best natural remedies to get rid of acne and pimple problems. It contains natural antibacterial properties which help in eliminating all the harmful bacteria which are causing pimples.

Egg whites, too, is an amazing option to get rid of a pimple on the nose. This home remedy also helps in drying out of acne. It is important to use it carefully for proper treatment of acne.

Baking soda is highly helpful in exfoliating the skin. Baking soda also helps in getting rid of excess oil from the skin along with dirt as well as impurities.

How to Prevent a Pimple Forming in Your Nose?

Follow good eating habits whenever you notice the chances of growth of pimples on the nose. You also have to follow some major rules.

Start washing of your face frequently and wiping it with the help of a lotion containing salicylic powder in it. Use scrubs to clear the ducts of the skin. Use the scrub which does not damage the skin.

Replace your diet with plant based foods, dairy products as well as fish and meat which is low in fats. You can also add more garlic and ginger in your dishes.

Also, do not pick your nose or blow it too hard or too frequently. This is helpful in preventing the irritation which may erupt inside the nose and may lead to the formation of a pimple.

When to See a Doctor? 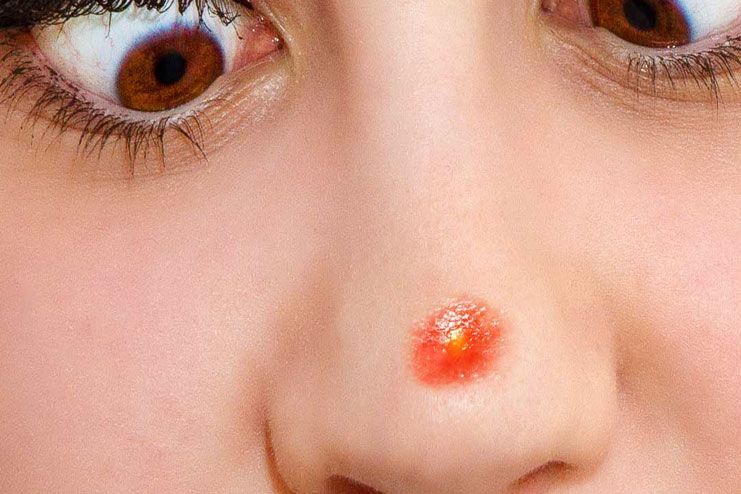 Even though the problem of acne may get resolved in few days, it is recommended to take the medical help immediately, if you experiencing severe issues such as,

Apart from this, you should also consult with your doctor if you do not find any relief after trying the above mentioned natural home remedies.

13 Foods To Increase Stamina And Energy In The Body

Somapika D - October 30, 2018
0
Nothing in excess is loved by anyone, well, except for money or food probably. The same is the case with the skin tags as...

What is Bronchitis?: Symptoms, Causes and Treatment

6 Ways to Use Cloves for Toothache For A Faster Pain...

5 Benefits of Choosing Digestive Biscuits for a Healthy Diet