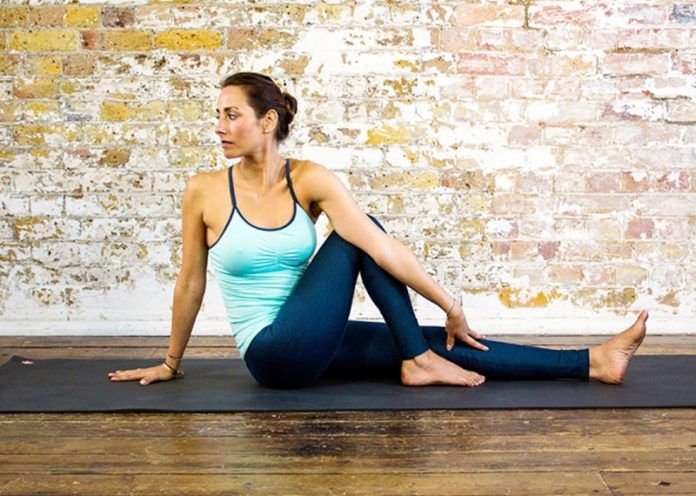 All of us tend to overindulge from time to time when it comes to satisfying the all consuming beast within us, which we may often refer to as the appetite.

Keeping the above statement in mind, we bring to you a concise list of yoga postures that would let you a feel less heavy even after a sumptuous meal.

Hit the mat some time after your lunch, and break a leg with these yoga poses for the heavy stomach.

Yoga in general aids digestion. Yet the list below has that factor, when it is about getting your bowels moving. This is all about yoga poses after lunch.

Also known as the child’s pose. To perform this position, one needs to kneel on the mat, and sit back on the heels, as you go over your legs, touching the mat with your forehead, as your hands reach out in front of you.

Enfolding the body, is known to massage the organs, and hence stimulate digestion. The pose is said to bring about a calming effect on the systems, bringing about sleep.

This is also called the hero pose, and is done by kneeling on the may, with ankles wide apart as you gently perch on your hips. The knees should be kept together, in order to avoid pains in the joints.

Once you are comfortable, you need to lean back, until the back of your head touches the ground, or as far back as you may go, preferably with the hands in an overhead position.

The posture is known to rejuvenate tired legs, and prevents bloating, due to the stretching action it has on the torso. Leaning back creates space in the frontal section of the body, thus catalyzing digestion.

Also known as the standing forward fold. This posture is performed by standing somewhat square, and folding the body forward from the hips. The knees may bend a little bit, in order to keep the spine straight.

The final position of the asana is achieved, when the big toes are held with two fingers. Beginners may choose to touch the shins or the calves.

The forward fold strengthens the digestive system, by taking pressure off the organs through a gentle inversion, thus aiding the circulation of blood. The fresh circulating blood brings abut digestion.

This posture is also known as the triangle pose. The legs need to be as far apart, up to at least a meter, for performing this posture.

Point one of your feet towards the lateral direction from your body. With the same hand try to touch the ground, even as you twist your torso with the above arm raised vertically above your body. The positions need to be held for as many breaths, as you may.

This posture is great for warming up all your muscles. The heat thus created, stimulates the digestive system, thus bringing about prompt digestion.

Called the double diamond twist, this posture needs to be performed by laying down on the mat, as you bring your right knee up to the chest, more across towards the left side, drawing and counting breaths in this position.

The knee needs to be held down by the arm on the same side, while the one on the other side needs to be stretched out in the opposite direction. Hold the position, even as you draw and count your breaths.

A pressure is built up in the abdominal region, which when released, brings about a rush of fresh blood in the region.

This posture simply translates to a gentle inversion of the body. It is performed by laying back on the mat, and raising your legs straight up against a wall. You may put some support under the hips, so as to elevate your posture. Holding the posture for some time can be rejuvenating for the body.

The posture is known to calm the systems, and refuel the energy levels, as well is known to be a cure for insomnia. The inverted position of the intestines, gives the system a break from the effects of gravity and aids movements within the bowels.

This is an advanced posture, although common amongst the regulars, affectionately referred to as the head stand.

A balance is needed between your sense of alignment and the core strength of your body. It is best performed under supervision until you have achieved some level of mastery.

It is recommended that at least a break of two to three hours is taken after a heavy lunch, if you plan to perform a headstand.

Read the latest on: Yoga

10 Stretches For Tailbone Pain – Get Rid Of The Coccyx Discomfort!

Somapika D - October 1, 2020
0
Before we proceed with discussing anything about the Anorexia Nervosa Treatment, I would like to share some statistics with you. Statistics from the National...

12 Foods To Eat After Running (5 Foods That You Should...

How to Lose Weight Fast : Effective and Simple Ways to...

Somapika D - September 18, 2020
0
According to a report (R) published in Science Daily, researchers from Oxford University found that being obese takes off years from one’s lifespan. So,...