How often do you find yourself feel dizzy and nauseous when you are inside the car and the car is in motion? Probably a number of times, right? Acute or chronic, motion sickness can end up making you feel very uncomfortable and uneasy, both feelings you never want to experience in your life.

Motion sickness is believed to be associated with one’s ear functions and the constant ringing that one feels when the vehicle or the mode of transportation is in motion. It is preferably the disturbance created in the inner ear that causes the problem.

If you have been in such situations, don’t worry because we have culminated a list of effective remedies that can help curb your nausea related to motion sickness while travelling.

What is Motion Sickness?

While, in simple terms, motion sickness is defined as the feeling of uneasiness and nausea when a vehicle is in motion, the same when explained in scientific terms attempts for a detailed approach. Motion Sickness is described as the form of disagreement between the kind of movement that our vision perceives and our vestibular system’s functioning.

It is also believed to a form of disturbance inflicted on the inner ear because of the persistent or repeated motion. Depending on the source of the motion, motion sickness is categorized into a few further categories like that of car sickness, sea sickness, air sickness etc.

While the reasons behind motion sickness root and end on a single reason, the same can have multiple symptoms which cumulatively degrades one’s quality of life.

It is believed that the primary reason behind the motion sickness is caused because of possible conflicting signals projected by inner ears, eyes and the sensory receptors with respect to the motion. If you didn’t know, there are multiple receptors in our body that perceive the motion.

When the motion instigated by the body is intentional, the senses that perceive the motion work in a coordinated manner but the moment someone’s inertia is disturbed, there are chances that the nervous system gets confused with the inputs and ends up causing motion sickness which is characterized by common symptoms like that of nausea.

While motion sickness is often taken lightly because of its lack of severity, let me bring it to your concern that these signs and symptoms are not just limited to one. There could be multiple symptoms affecting a person who suffers from motion sickness.

Some of the noticeable symptoms of motion sickness include:

How to Get Rid of Motion Sickness? 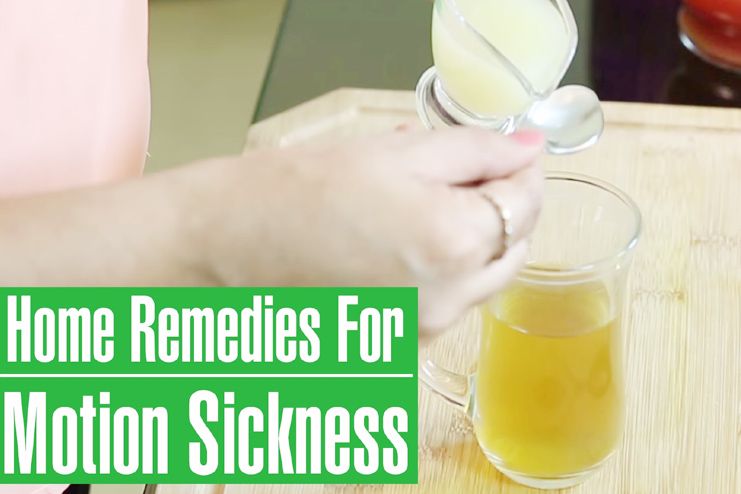 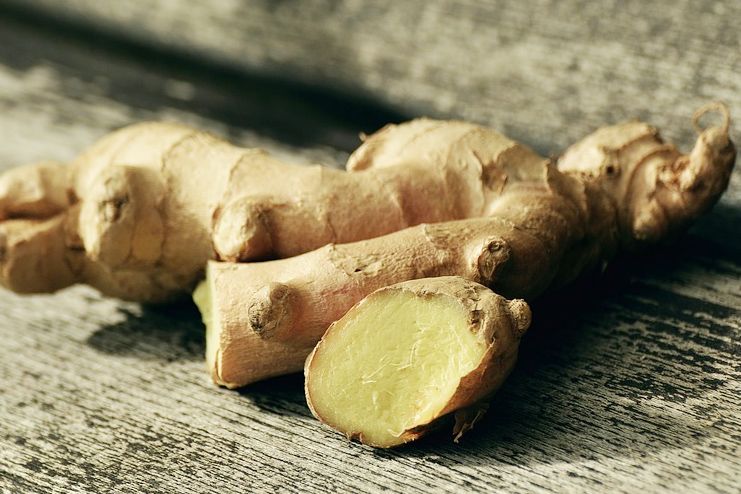 Ginger is one of the most effective remedies to keep motion sickness at bay. If normal over-the-counter medication is not something you want to acquaint yourself with, opt for ginger as a cure for motion sickness.

Study (R) shows that ginger not just helps curb nausea but also inhibits the activity of tachygastric activity whose heightened levels often tend to aggravate the condition of motion sickness. Not just that, it also reduces the release of vasopressin which is often induced by the circular vection.

Suck on some ginger toffees or even sip on ginger tea, if the same is available to you 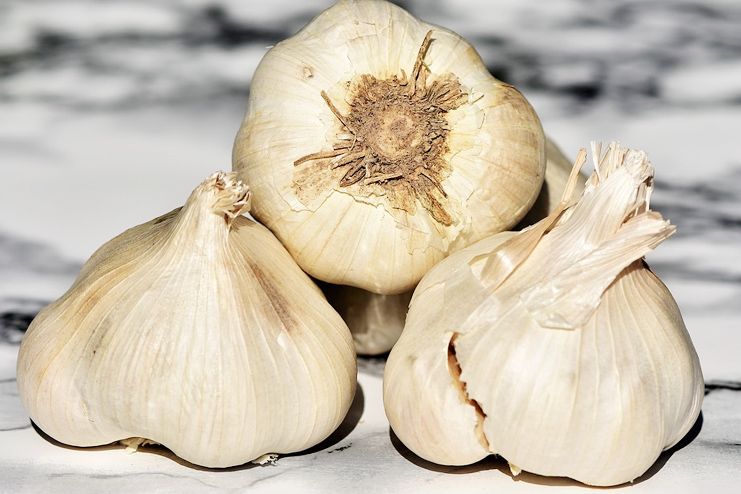 The mention of garlic for motion sickness might be a bit averting, isn’t it? But, trust me, it actually does work. If you are looking for long term effects for preventing motion sickness, this is definitely the one to go for.

Chewing on garlic isn’t going to instantaneously help stop motion sickness but consuming it a few days prior to any kind of big trip can help keep these symptoms in check. 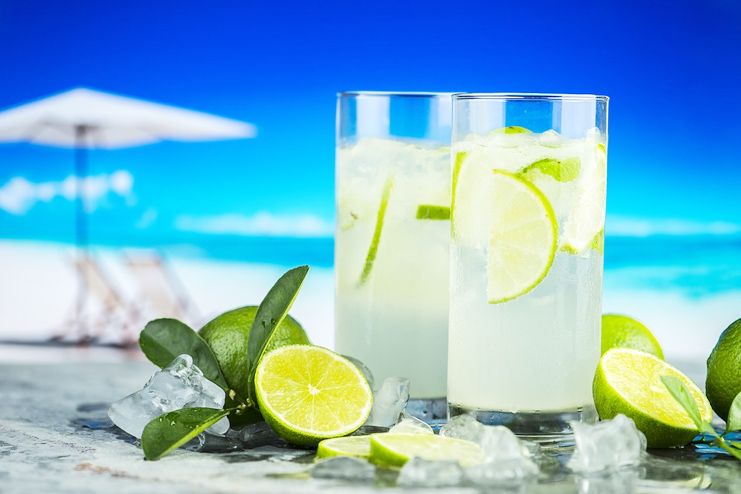 Lemon is possibly one of your best friends if you struggle with motion sickness while travelling. Every part of lemon comes in handy when it comes to the treatment for motion sickness.

While the lemon juice beneficially settles down the stomach and the queasiness that comes along with it, the lemon rind and lemon leaves have a distinct tangy smell (R) to it which is very good for settling down the symptoms related to nausea and uneasiness.

The acupuncture pressure point for motion sickness is known as the Pericardium – 6 (P6) (R) which is located in one’s forearm, three finger breadths under the wrist, just in between the two tendons.

Are you wondering how putting pressure on a certain point like that of P6 can provide you with relief from motion sickness? This specific pericardium pathway passes along our chest, crossing the diaphragm and passes through the stomach as well. Putting pressure on it helps alleviate the uneasiness in the stomach that often tends to be the primary cause behind the aggravating signs of the motion sickness. 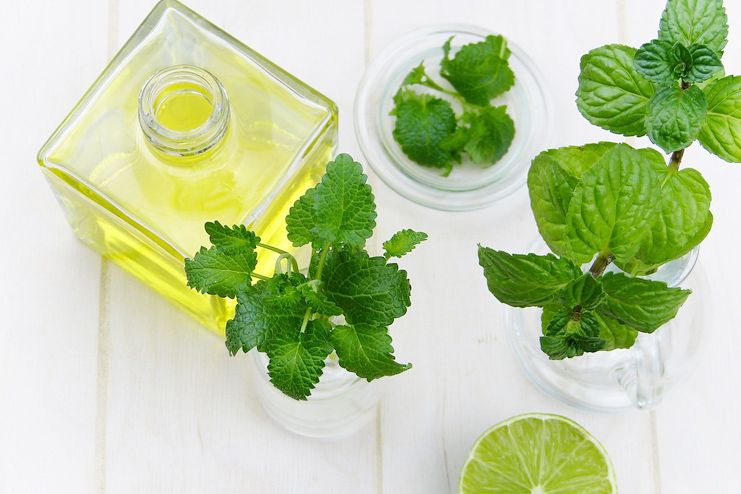 Because of its cooling essence because of the mint, this helps settle down the unfurling inside the stomach and also gets rid of nausea (R) for good. 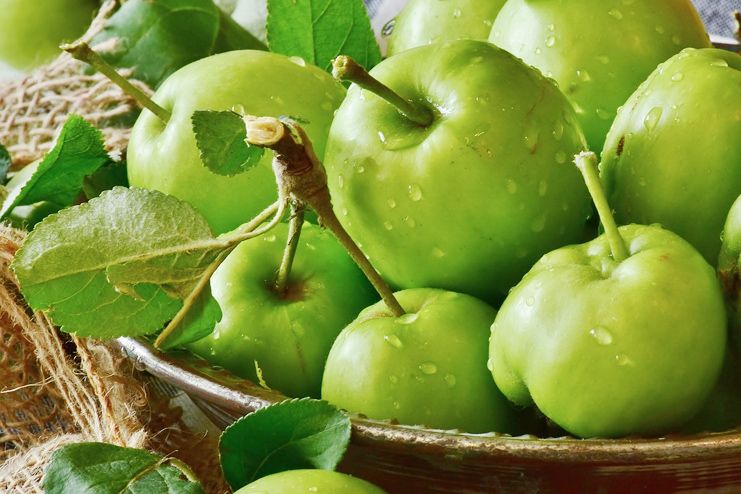 Green Apples are also an effective home remedy for motion sickness because of the presence of pectin which helps neutralize the stomach acids that could contribute to motion sickness. Not just that, even the natural sugars that are present in the green apples help fight the nausea and unsettling feeling that one feels. 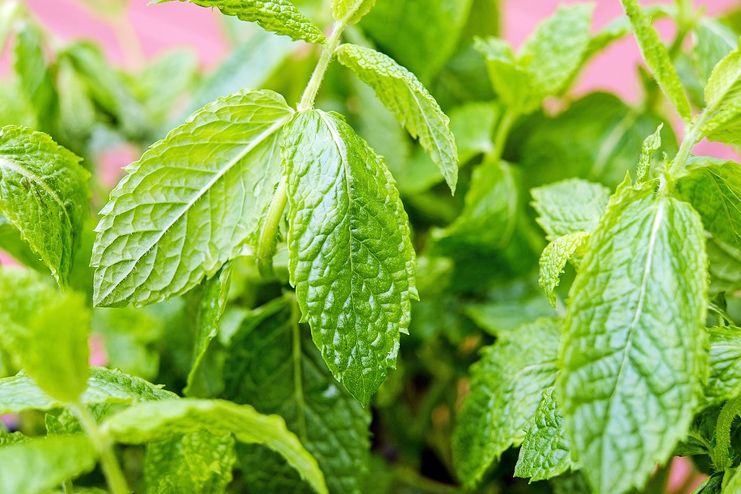 The fresh flavor of the mint leaves actually do help to alleviate the signs and symptoms of motion sickness while travelling. As it is a natural herb with little to no side effects, it is considered as a good option even for small children.

Mint leaves have antiemetic properties (R) which is what helps keep motion sickness at bay. 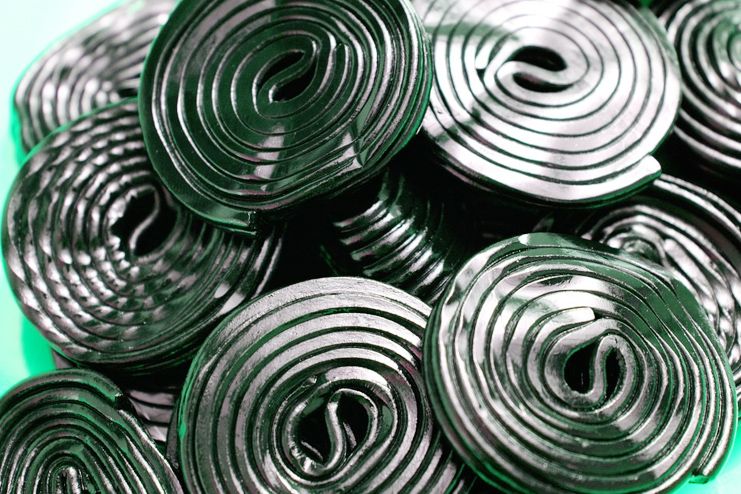 Yet another amazing remedy to stop car motion sickness is to opt for licorice, be it in the form of candies, concoction or even tincture.

Licorice has natural antacid (R) along with anti-inflammatory properties which has beneficial effects on treating the signs and symptoms relating to acidity in the stomach and even helps bring down the mucus in the lining of the stomach which is definitely an added bonus.

Even though there are not much scientific studies or evidence to back up the claims on how fenugreek tea actually does help with the wave of nausea and dizziness that one experiences because of motion sickness, it is believed that it is the digestion boosting property that contributes to curbing the signs and symptoms relating to motion sickness.

Drink the fenugreek tea in small sips to help settle your stomach when nausea is way too bad for you. 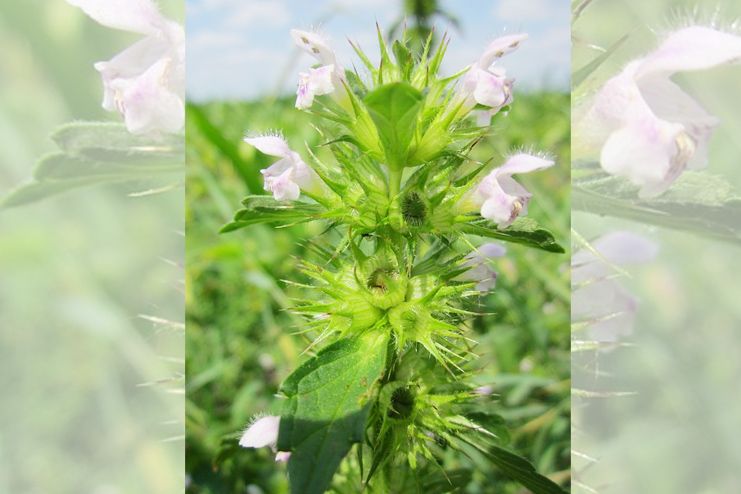 This is yet another uncommon and less known cure for motion sickness that not many people are aware of. While there are no scientific evidence behind how the antiemetic properties of black horehound works, the field of alternative medicine claims that sure does have positive effects to stop motion sickness.

As the consumption of black horehound is not that popularized, it is always best to consult a doctor before you start consuming this.

Apple Cider Vinegar and its impact in treating the signs and symptoms relating to motion sickness is definitely a positive outtake. The alkaline property of ACV on the body helps neutralizing the excessive acidity in the stomach, thereby reducing the possibilities of motion sickness.

12. Crackers or Biscuits for Motion Sickness 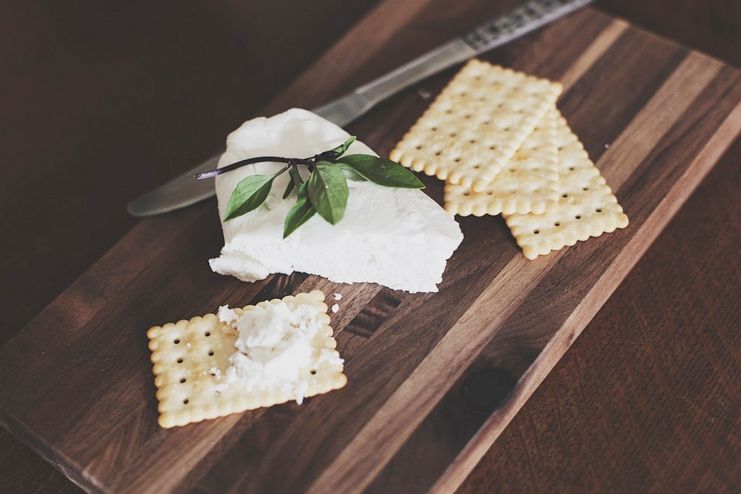 If you are someone who goes by the myth that travelling in the empty stomach would help with the motion sickness, I hate to break it to you but you are sadly mistaken. Instead of being completely empty stomach, try and nibble on some salt crackers or other biscuits low on sugar to help with the unsettling feeling in the stomach.

This prevents the excessive secretion of gastric juices in empty stomach and helps curb the feeling of nausea as well.

Nibble on some salt crackers throughout journey instead of going out empty stomach. 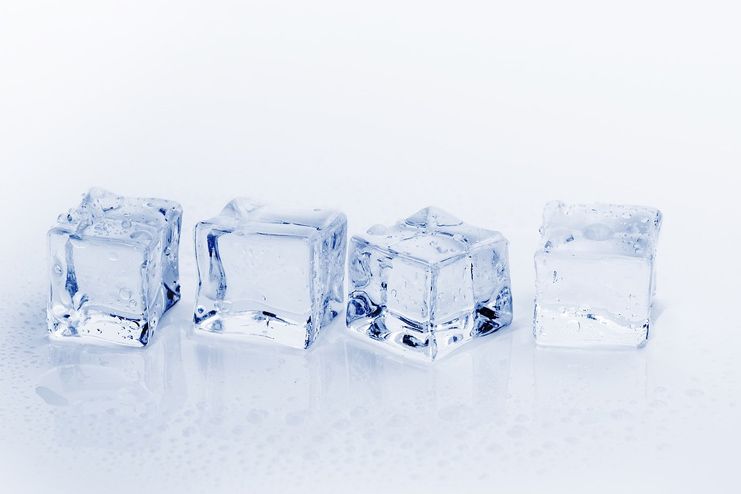 While it may not seem like much, sucking on ice chips help curb the signs and symptoms of motion sickness. It brings down the feeling of nausea. It fights the unsettling feeling along with the queasiness. Not just that, it is also beneficial in neutralizing the acidity in the stomach and for the best part, IT IS CALORIE FREE!

Suck on some ice chips when the morning sickness gets worse with the travelling. 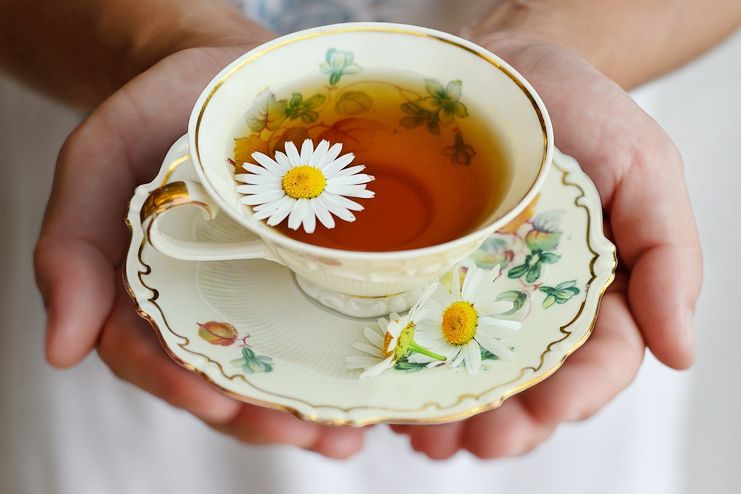 Much like any other form of tea, even chamomile helps curb the nauseating feeling that one encounters if they have motion sickness. If you are looking for easy ways to treat motion sickness at home, sipping on chamomile tea is definitely one of them.

This tea has a relaxing effect on the body which helps fight the headache and nausea that often come with motion sickness. It also energizes the body and relieves any signs and symptoms of fatigue that might come with the motion sickness.

How to Prevent Motion Sickness?

While it is always good to be well versed with some good old remedies, isn’t it better to prevent the possibilities of motion sickness in the first place?

There are some preventive measures that one can opt for to effectively prevent the signs and symptoms related to motion sickness.

Motion sickness can happen to anyone, from the age of 8 till 80. While the problem might not seem very life threatening, it tends to make your experience a big downer which is not something any wishes for. Try and opt for any of these above mentioned remedies to keep them in check.

What Happens If You Wash Your Hands Too Much? 3 Possible Side Effects!!

How To Get Rid Of Loose Skin? 11 Fool Proof Methods

Vrushali Gavali - February 5, 2022
0
Vitamin D is essential for everyone, it is a fat-soluble vitamin that is required for our body. It is an important nutrient...

What Happens If You Sleep 6 Hours A Day? Know The...