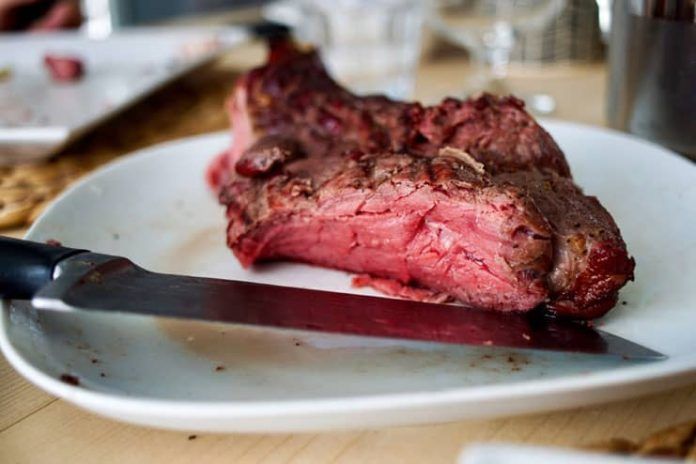 While the consumption of red meats have always been frowned upon, stating that their impacts are bad for one’s health, the same might be a possible myth after all. A few new studies have pointed out some different takes on the situation stating that the thoughts aren’t that effective as they might seem as. Going cold turkey with the red meats won’t do much of a difference.

A new study conducted by the researchers from the University of Nottingham stated saying that going cold turkey with the red meats is a necessity but cutting down the consumption by half is more than enough to do you good. The same has been found to have direct impacts on the overall LDL cholesterol in the blood which further reduces the risks associated with heart diseases.

Some of the red and processed meat that is generally talked about include beef, pork, sausages, lamb, veal and a few more. These are the ones which also include the smoked and cured meats in the list. The main issue with these meats is the fact that they are loaded with saturated fatty acids in them is what causes the risks even further.

The alarming risks of eating red meats was what made people think of making a healthier switch with the vegetarian and vegan diets and cut out the consumption of meats completely from their diet. The researchers from the University of Nottingham found that there is no significance in cutting out the red meat consumption completely; rather, the same helps when you reduce the amount but still consume it every now and then.

Reduction in the levels of cholesterol

As mentioned before, the researchers do believe that going cold turkey with the red meat isn’t the way to go. Instead, it is best that one does focus on reducing the cholesterol levels in the body for good because that is what matters in the end.

During the intervention trial, around 46 people reduced their consumption of the red meat over a period of 12 weeks by ensuring to substitute the same for white meat, fishes or even the meat substitutes. They also focused on reducing the portion size of the red meat they were consuming. The participants were also asked to maintain a food diary to keep a track of their eating habits. In addition to that, they also had to get blood tests done before the test and during the interval of the intervention as well.

Professor Andrew Salter, from the University of Nottingham’s School of Biosciences, who is also the lead author of the study stated saying that the consumption of a high saturated fatty acid diet along with the processes meats have been associated with the heart diseases and the risks of colon cancer as well.

The studies priorly conducted have also showcased how the people who tend to stick to a high red meat diet have 40% higher risks of dying because of the chronic diseases around. They found that making changes to the diet and switching things up when it comes to the red and processed meat can significantly help reduce the risks of that and promote better health for everyone.

Along with the reduction of the LDL in the blood stream, the same was also found to have direct impacts on reducing the presence of the red and white cells in the bloodstream, further adding on to the list of benefits.

Dr Liz Simpson from the University of Nottingham’s School of Life Sciences and the co-author of the study stated saying that the meat is actually a very rich source of micronutrients that have direct impacts on the overall body functions and promoting the manufacturing of the blood cells. It is true that the same can be attained with a plant based diet as well but the same isn’t the same.

This is the reason why it is best to simply reduce the consumption of the red meats and not completely cut them out of the diet if you are a non-vegetarian.

Apart from having better impacts on one’s health, the reason why reducing the intake of red meats are helpful is also because it promotes better food security and sustainability which is a necessity in today’s world. The researchers are now conducting further studies to find better ways to showcase more around the subject.

10 Ways To Stop Sweating In Nervous Situation – Get Better Control

What Happens If You Sleep On The Floor? 11 Unsung Benefits And Risks!

Working From Home? Advice For Your Own Ergonomic Home Office 2021

Tips to Reduce Too Much Fiber in Your Diet

HealthSpectra - April 22, 2020
0
Inside magazine: We are elated to bring you yet another installment of the HealthSpectra magazine. Amidst such harsh times, we hope this magazine brings you...

Estrogen and Progesterone a Possible Cause of Early Signs of Alzheimer’s...

Usage And Benefits Of Barley Tea