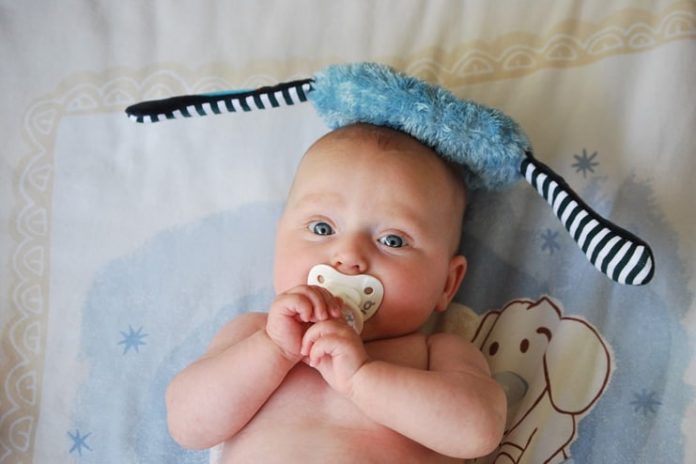 Pacifier is an ultimate must have for every toddler. While losing the pacifiers is quite a common scenario faced by every new parent, new study definitely goes above and beyond to prove something that is most likely going to gross every person who reads this. Sucking your baby’s pacifier is possibly the last thing on your mind, right?

A new study (R) conducted by the researchers from the American College of Allergy, Asthma, and Immunology have established links finding that parental sucking on a pacifier can actually help lower the risks of allergies in the child. Gross, right? I know. But it is now a scientifically proven fact. So, if you were worried about the creeping germs and microbes on your baby’s pacifier, it is believed that you (as a parent) sucking it, can possibly keep the allergies at bay.

Eliane Abou-Jaoude, MD, ACAAI member and lead author on the study conducted by Henry Ford Health System in Detroit who is also a specialized allergist stated that she and her team conducted rounds of questioning on 128 mothers of infants multiple times within a time period of around 18 months. The main subject of conversation was how they cleaned their baby’s pacifier.

Upon detection and further insight into the matter, the researchers found that the children who had their mother suck on their pacifiers with lower levels of Immunoglobulin E (IgE). If you are wondering what that is, IgE is an antibody that is produced in response to allergic reactions in the body. Not just that, the higher levels of IgE in the body is often associated with induction and consequent development of the chronic allergies and even asthma.

Out of the 128 mothers that were interviewed over the time of 18 months, only 58% of them had children who used pacifiers. On asking the mode of cleaning to these mothers, the researchers found that 41% of them cleaned the pacifiers using the sterilization mode, 72% of the parents stuck to the simple hand washing technique and the rest 12% were the ones who actually did the parental sucking of the pacifiers.

Upon close inspection of the findings and statistics, the researchers drew a conclusion finding that there was a subsequent suppress in the levels of the IgE in the blood stream in the children who had their parents suck on their pacifiers to clean them. The same started on from the 10 months mark and went on till the end of 18 months too. Edward Zoratti, MD, ACAAI member and co-author of the study was the one who reported these findings.

Zoratti further exclaimed saying that the findings are still not completely conclusive. There needs to be further studies conducted to find the overall view and prospect of the study’s final conclusion. For initial results and conclusions, the researchers believe that it is mainly because of the transfer of the health-promoting microbes from the parent’s mouth. It is still unclear whether or not the IgE production in the child is dragged on to the later years in their lives.

Yet another co-author of the study, Dr. Abou-Jaoude stated saying that we are all familiar with the fact that the early exposure to certain microorganisms in our body is very beneficial in stimulating the overall immune response in the body, henceforth boosting the overall immunity of the body. This study primarily builds a direct link between the parents who suck their baby’s pacifier with the babies having a lowered level of IgE. This doesn’t necessarily portray the fact that parental sucking is directly correlated or influencing the lowered levels of IgE in the baby. To establish that, further and extensive studies are required.

15 Natural Remedies For Year Round Allergies – Keep Them In Check

7 Good Drinks For Teeth (6 Drinks That Are Bad)

Somapika D - September 6, 2019
0
For the most part of our life, we are either dependant on human milk, cow milk and the packaged milk powder. But, did you...

15 Best Ayurvedic Treatment For Glowing Skin – Get The Glow...

12 Natural Remedies For Baker’s Cyst – Drain The Pain Away