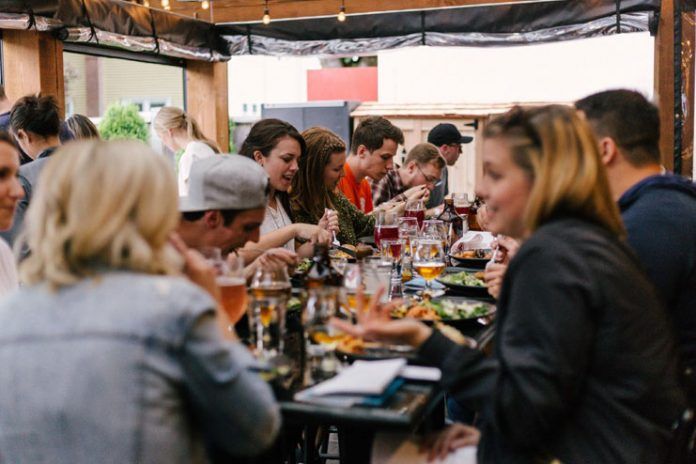 A new study (R) conducted by the researchers from Penn State found that apart from lifestyle choices as well as genetics, it is likely that there are a number of other community factors that go into deducing the lifespan of an individual.

The communities which have more fast food restaurants, more population density and even a cut out on the jobs, it is likely that they will have a shorter lifespan in comparison to the others who don’t have these factors influencing their life.

Elizabeth Dobis, a postdoctoral scholar at the Penn State-based Northeast Regional Center for Rural Development (NERCRD), who is also the lead author of the study stated saying that the life expectancy of people in America has suddenly declined for the very first time in several decades.

The researchers further looked into some of the place based and personal factors amidst the individuals included to find better ways to find the specific community characteristics could be contributing to this possible cause of variation in the life expectancy of people.

Explaining life expectancy, it is the time frame that people born in a year are expected to live. Dobis along with her colleagues looked into the county by county life expectancy of people residing there and compared the 2014 statistics with that of the 1980s. The researchers analysed data from over 3000 US counties.

For better accuracy, the researchers developed a working statistical model for determining the difference among the varying community variables along with the life expectancy of the population during 2014. During the same, some of the personal variables were kept constant including the sex, race, education etc.

Some of the community variables that were examined by the researchers included “health care access, population growth and density, fast food restaurants, healthy food access, employment by sector, urbanization, and social capital along with the social cohesion among the students.”

They did analyze each of the variables in the process while keeping the other ones constant. This later led them to get a better understanding of the factors that could be affecting the overall life expectancy the most.

Dobis further exclaimed saying that while they were able to control the historical life expectancy, they also found three of the most important community factors that could further exert a very negative implication on the life expectancy of the people including the heightened numbers of fast food restaurants, high population density and lastly, the more jobs in the mining industry.

In terms of statistical representation, the researchers found that for every 1% increase in the fast food restaurants, the life expectancy of the individuals decreased by 0.004 years and 0.006 years in men and women respectively.

The same depicts around 15-20 days shorter lifespan in the individuals. Additionally, even a 1% increase in the jobs in the mining industry further contribute to a reduced life expectancy by 0.04 years and 0.06 years in men and women respectively.

But, apart from the negative implications of the community factors, the researchers also did find that there are some positive aspects to this, mainly because of the growing population, better access to healthcare and social cohesion.

NERCRD Director Stephan Goetz, professor of agricultural economics and regional economics at Penn State, who is also the co-author of the study clarified his disbelief when he found that there are some positive contributions to the society with the community factors as well.

Goetz also stated that there is a connection between staying in the areas of lower population density and with a rural area surrounding you. It has been associated with a higher life expectancy. This also suggests that living in a highly populated area with all the latest amenities come at a cost of your life expectancy.

Additionally, people living in a community with better social cohesion are likely going to have better life expectancy because of how people help each other during times of need.

This study not just analysed the social and community factors involved behind the condition of life expectancy but also found the disparities in the life expectancy and how they are geographically clustered.

The research was also effective enough in pointing out some of the hot spots of the high life expectancy spots across the world. Even though the researchers have found better clarity of things, it is likely that they will need better policy implications as there could be changes related to the community factors of the counties and their impacts on the life expectancy of the people.

What Happens If You Don’t Brush Your Tongue? 7 Grave Side Effects!

Ideas On How Long Does it Take To Form A Habit – Study It All!

11 Signs That You’d Rather Pick Solitude Over Company

How To Manage Anger? 15 Effective Ways to Handle Sudden Rage

How To Forget Bad Memories? 8 Ways To Detox Your Mind.

HealthSpectra - December 3, 2019
0
Inside magazine: Good health is the most valuable asset to all of us irrespective of our age. We are more than glad to come up...

New study claims that “transmitted stress” from other people is just...

New Study Correlates the Impact of Lack of Sleep with Weight...

Is Type-2 Diabetes reversible? 2 Effective Doctor-Suggested Ways to Promote That